We've Got Our Eye On You! 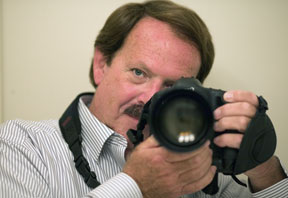 Back in 1993, John Van Etten was my neighbor on Panama City Beach who never introduced himself or said hello to me. I did not know Van Etten was Detective John Van Etten, as a police officer his residence address is protected under Florida law.

Little did I know that my neighbor across the street was the corrupt police officer I was trying to track down for falsifying reports and affidavits in a robbery-assault case against a homeless man, Steve Alan Nunnery.

That was 13 years ago, Van Etten may not know this fact, but one thing I learned in law enforcement is that in Florida bad cops are good for the crime 6 years after they leave the job. The statute of limitations doesn't start running until he leaves the job, maybe our readers will best determine what happens to this man. In fact he also came after me and had multiple criminal investigations launched against me in retaliation for exposing him and his criminal behavior covering up for the Dixie Mafia, see the docs at the end of the story.

Steve Nunnery is a severely disfigured homeless man whose face was ripped off by a tractor-trailer rig while walking alongside a Florida highway years ago. Since that time he lives as hobos do and he's been arrested more than 200 times for public intoxication and trespassing. That's his trademark, like winding the gold Seiko watch I gave him for successfully defending himself against those trumped up charges, Steve is going to drink and that's his crime, nothing else.

Back on Monday February 17, 1992, Scott Parker a former investigator with the Florida State Attorneys office was front man for the Dixie Mafia at a strip joint named Scandals located at 3602 West Highway 98 in Panama City, Florida. Scandals was a hot late night place where several politicians could be seen leaving in stretch limos loaded down with whores.

Behind Scandals lounge was a huge cane field where hobos and homeless people often bedded down when police weren't looking. Scott Parker was a real piece work, vicious, violent and abrasive with a hell of a temper who like "Frog" Alan Johnson, a former Bay County Sheriff' s detective were both front men running prostitutes, drugs and favors for the Dixie Mafia.

On that fateful day, Parker apparently beat his wife Valerie Parker and called upon Van Etten to bail him out. According to Officer Jim Donnley who wrote the offense report, Valerie Parker was the victim of an armed robbery who was confronted by a "white male prior to the lounge opening. She stated the white male entered the lounge thru the door on the 98-side, which was supposed to be locked. The victim was struck on the right side of her face and knocked down. The victim got up and the white male grabbed her and they fell to the floor. The white male was holding the victim down by her hair, the white male starting cussing the victim. Victim stated the white male said, "God Dam you bitch, you got any fucking money? I' ve been watching you, you know what I could do to you. You know I could rape you..." 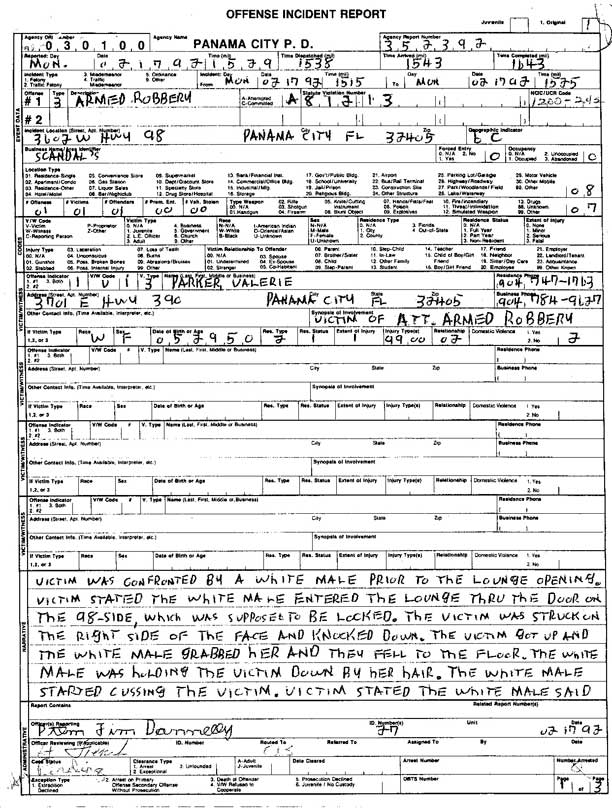 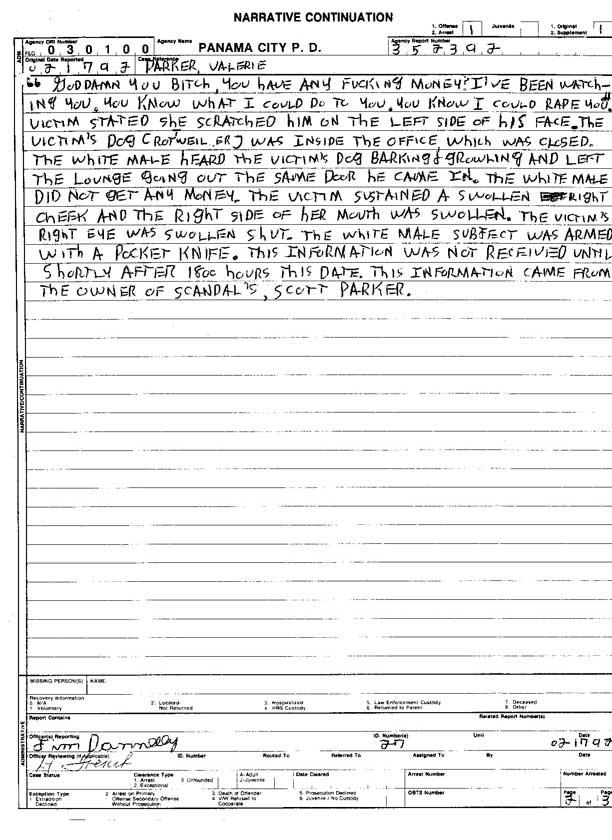 Victim stated she scratched him on the left side of his face. The victim's dog a Rotweiler, was inside the office which was closed. The white male heard the victim' s dog barking and growling and left the lounge going out the same door he came in. The white male did not get any money, the victim sustained a swollen right cheek and the right side of her mouth was swollen. Her right eye was swollen shut. The white male suspect was armed with a pocket knife.

Patrolman Donnley described the white male as having very strong body odor, unshaven, 180-190lbs, 5' 10", curly hair with a tattoo on the forearm of unknown description wearing a black t- shirt and dark blue jeans, Officer Donnley wrote the report to reflect that Valerie Parker had actually given him this description. 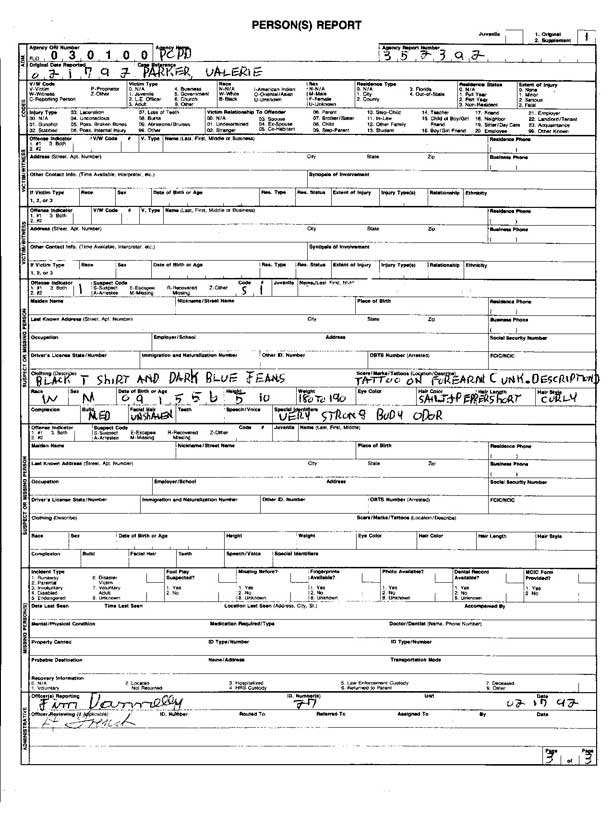 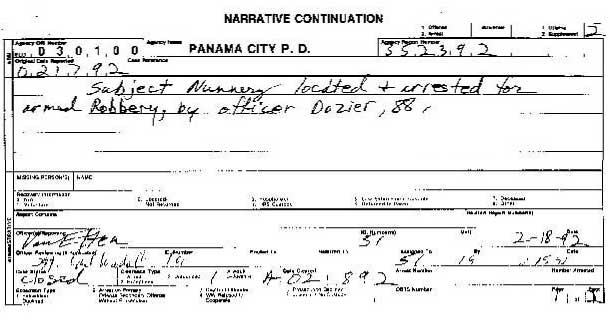 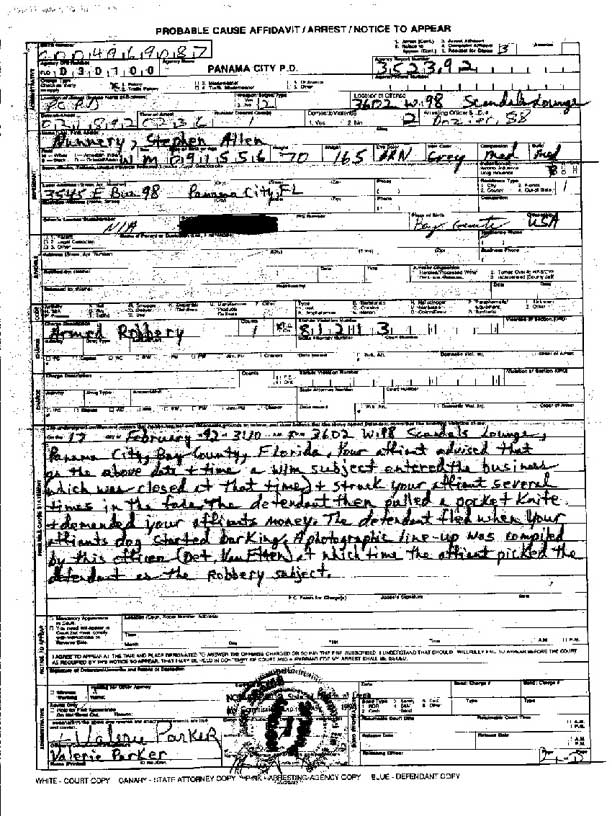 Apparently when Van Etten arrived that day he already had a suspect for the bogus crime. His name was Steve Alan Nunnery. I don't know if Van Etten has any stock in Corrections Corporation of America, the private prison company owned by top dogs in the national Republican Party from Nashville, Tennessee with close ties to the Bush family. CCA has a contract with Bay County to run all the jails and prisons.

Nunnery became a guest of CCA for over 17 months at $50.00 per day, costing taxpayers over $25,500.00 not counting 3 trips to Chattahoochee State Mental Hospital to test and re-test him for mental competency because he demanded a jury trial.

The Florida State Public Defender insisted that he cop a plea and negotiate a deal, but Nunnery is smart as hell, he had Blacks Law Dictionary for bedtime reading.

In Chief Van Etten's perjured affidavit from the photographic lineup supposedly taken from victim Valerie Parker, Van Etten states, "Your Affiant states that on the above date and time a white male subject entered the business which was closed at the time and struck your Affiant several times in the face. The defendant then pulled a pocket knife and demanded your Affiants money. The defendant fled when your Affiant's dog started barking.

"A photographic lineup was compiled by this officer (Detective Van Etten) at which time the Affiant picked the defendant as the robbery suspect."

Nunnery was arrested and thrown into the Bay County jail. He stayed there for approximately 17 months because he demanded a jury trial for a crime he did not commit. The Florida Public Defenders Office, his court appointed attorney Janice Cogburn Shaffer, had insisted that he must cop a plea of guilty in return for a reduced prison term.

Nunnery was no fool, he knew what his rights were but in jail it is difficult to get anyone to listen to you or pay attention to the law. He was shipped back and forth to the Florida State Mental Hospital for mental competency evaluation, all because he chose to fight the corrupt system. Anyone who challenges the system is immediately labeled nuts.

Judges often ignore the law when it comes down to homeless people and as of this writing Steve is back in the CCA private jail with a $15,000.00 bond set by Judge Eligah Smiley for disorderly public intoxication.

Nunnery has never had a "first appearance" in the current 2006 case, as required by law, so therefore he's going to be there for a long time burning up tax dollars unless someone comes up with $15,000.00 bond to free him.

Nunnery told an incredible story, one that aroused my conscience. It was a story of vile, evil and corrupt treatment at the hands of crooked police officers, CCA and the court system. He said "he had been framed for a crime he did not commit, possibly one that never happened". Nunnery begged me to aid in his defense and after taking 6 more collect calls from the jail I figured just maybe there was something to his incredible story.

Immediately as I began to investigate and uncover records something terribly bad began to surface in my mind, document after document painted a picture of a criminal justice system being operated for profit at the expense of taxpayers and unsuspecting citizens. Anyone could be a target, a victim of police and courts out of control.

I was able to secure a subpoena for Nunnery to the victim Valerie Parker whom I had located in Dothan, Alabama. The day before the trial I entered the Panama City police department and requested to speak to Detective Van Etten. I took a seat and was told it would be a short wait as he was in his office with someone else.

Approximately 30 minutes later, I was called into an office inside the police station and handed a telephone, on the other end was Van Etten who told me he was 30 miles away and wanted to know what business I had trying to question him about the robbery case.

The next night in court Nunnery fired his public defender Janice Cogburn Shaffer who sat on a front row bench crying after I convinced Circuit Judge Don Sirmons to let Nunnery defend himself in front of that jury. Otherwise it appeared Shaffer would have shipped him off on the next train to  Florida State Prison in Starke, Florida.

The Court Room was full of Florida State Public Defenders who had received word of what was going down at the courthouse. Chief Public Defender Herman Laramore sat on the front row comforting a crying Shaffer who was distraught over losing control of the Nunnery case. The defense called Detective John Van Etten and went over his perjured report and "Nunnery said what should I do next..I said "call the victim, Valerie Parker..."

"Valerie Parker came to the stand... took the oath, sat down and Nunnery approached her on the wittness stand and asked her why she said he attempted to rob her and physically attacked her? Her response was ...Sir, I've never seen you in my life, I don't know why I'm here today ...I was never attacked and robbed by anyone except my former husband Scott Parker, a former investigator with the Florida State Attorney who beat me on that date and called his buddies at the Panama City Police Department." Parker concluded, "Yes, I remember you as one of the homeless people sleeping behind Scandals Lounge and I remember Scott meeting with the Police Department over ways of getting rid of the homless people sleeping there.."

It took the jury a few minutes to deliver the verdict of Not Guilty! 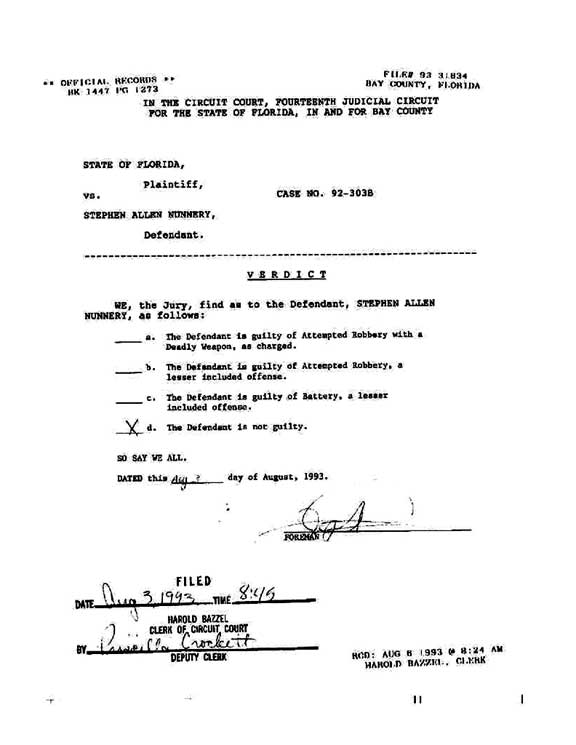 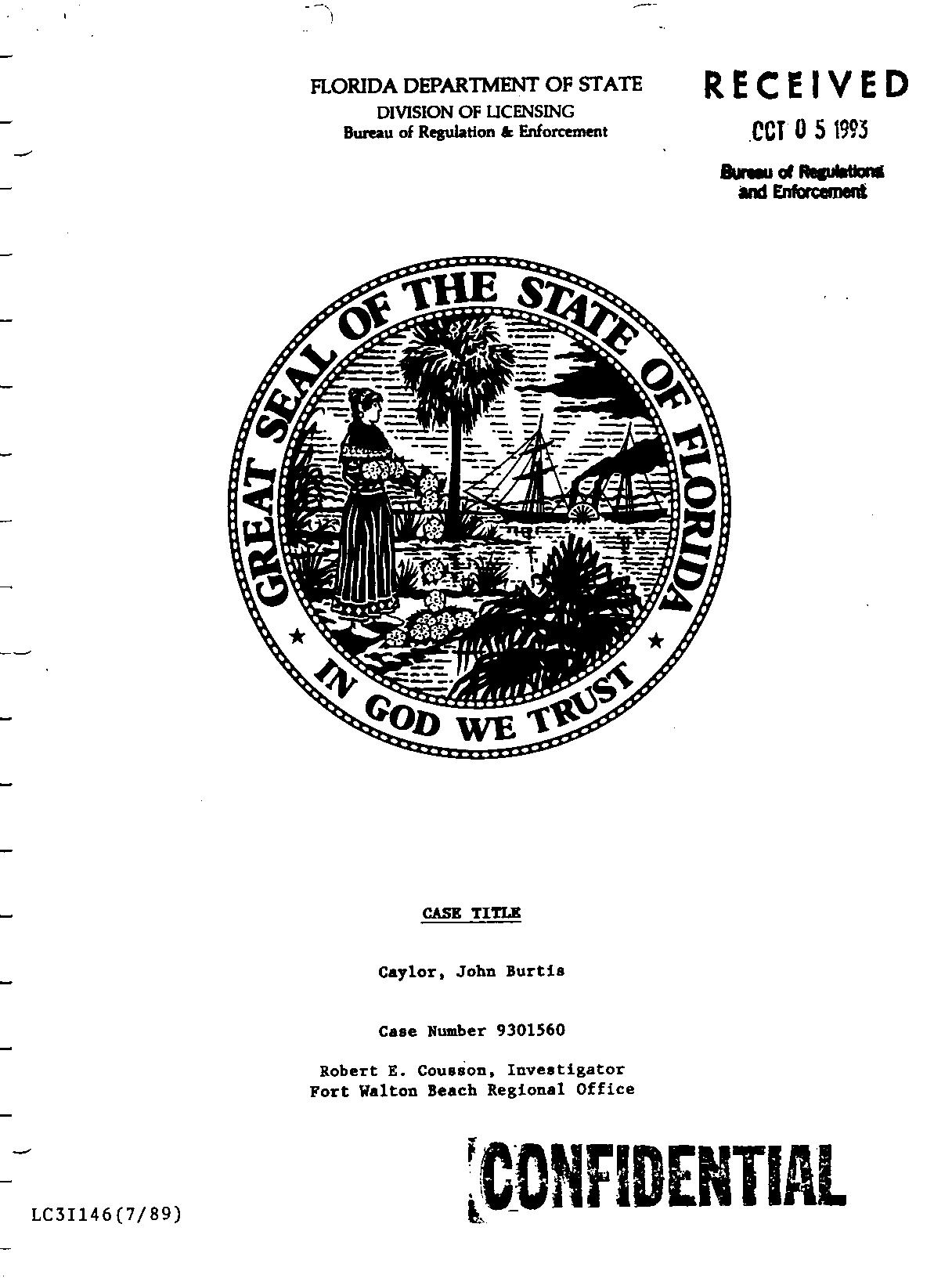 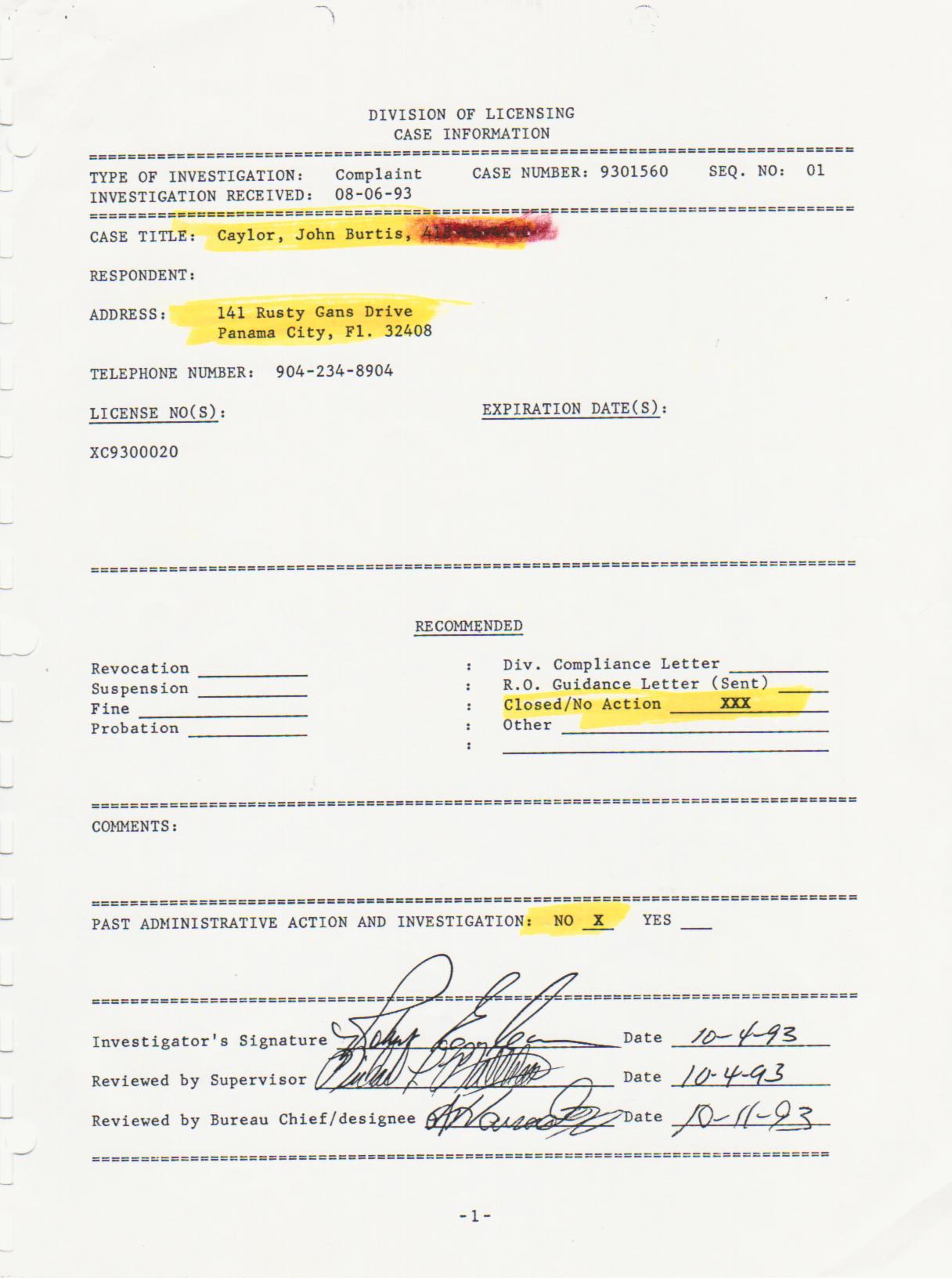 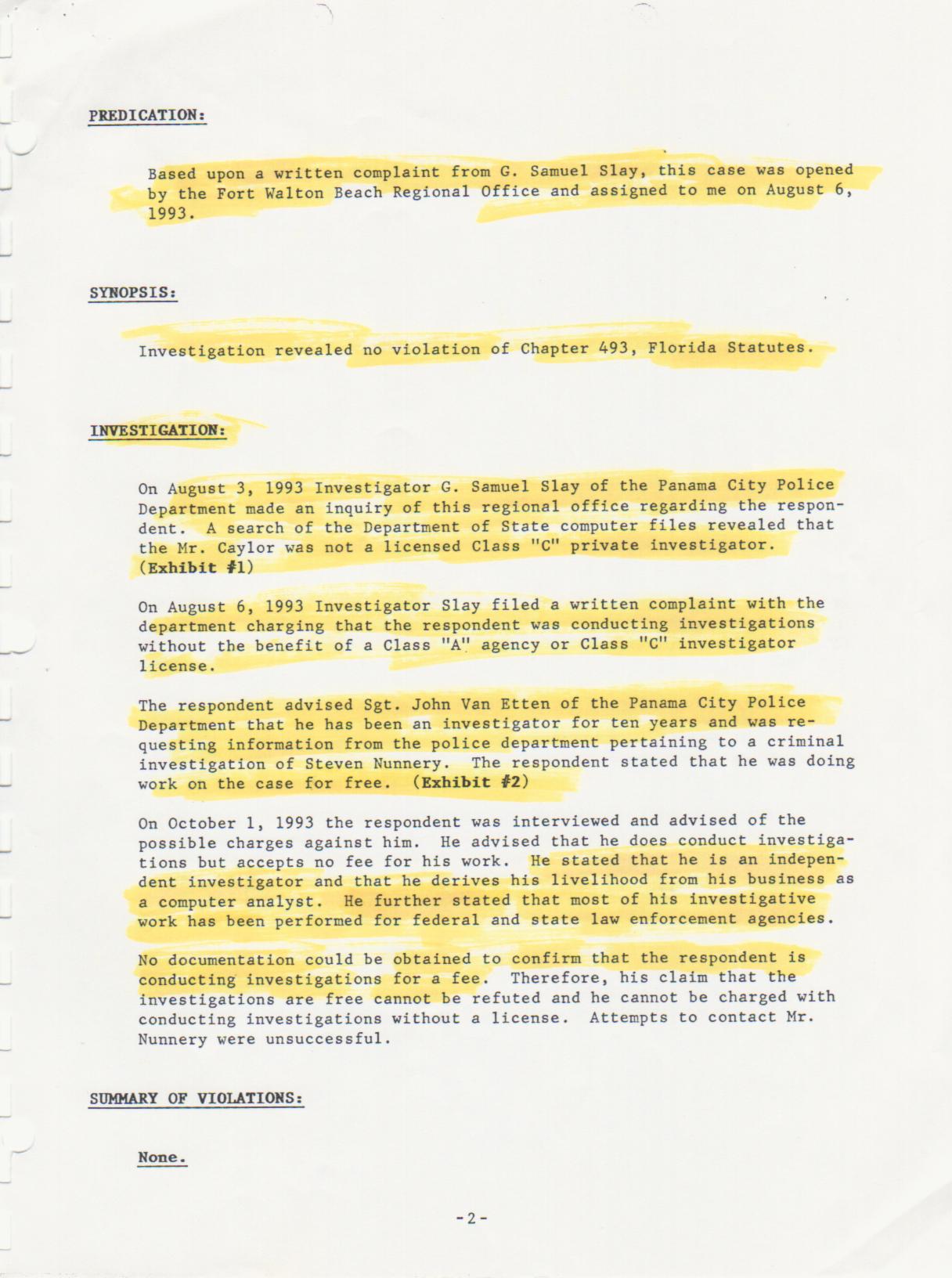 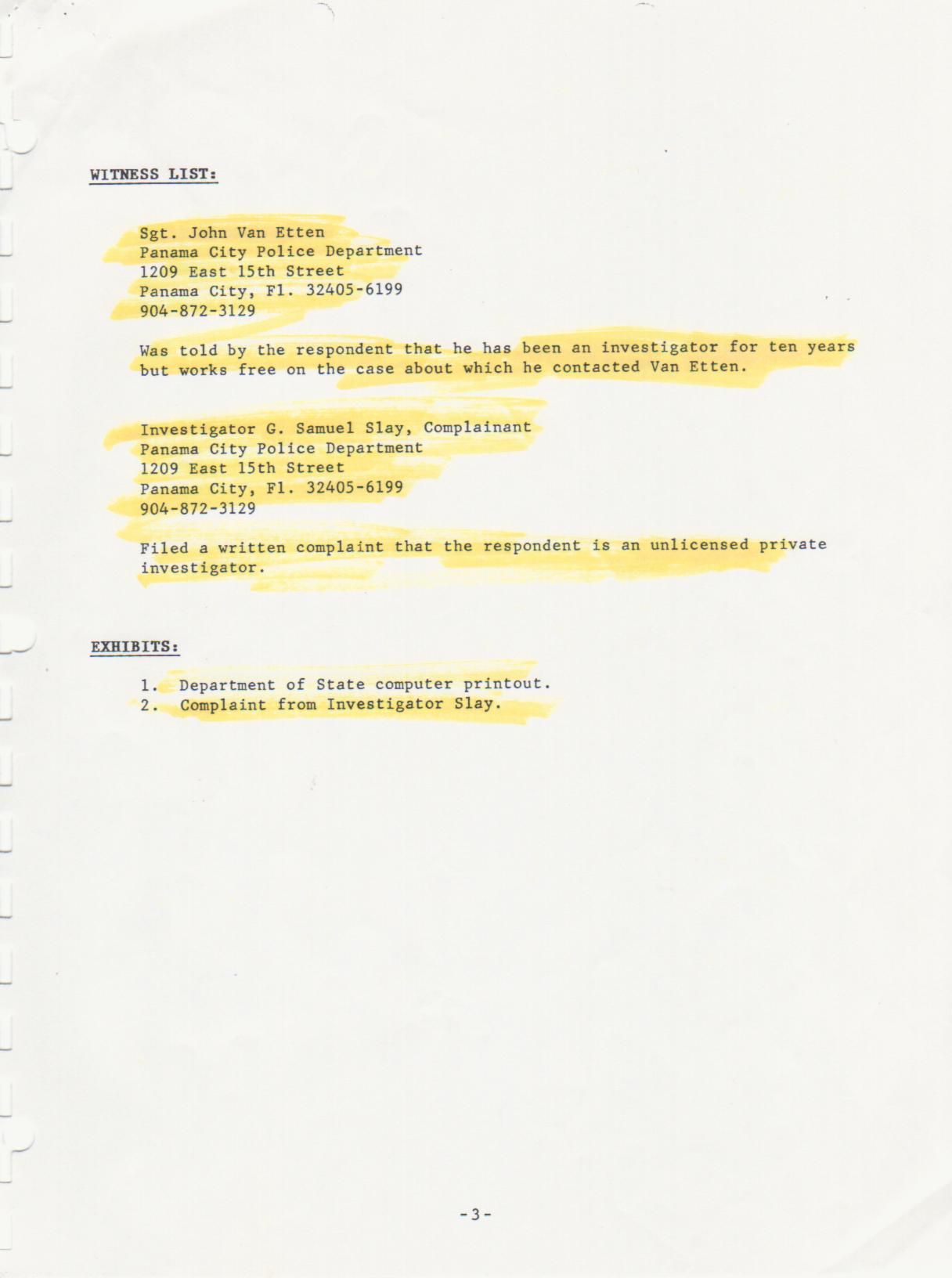 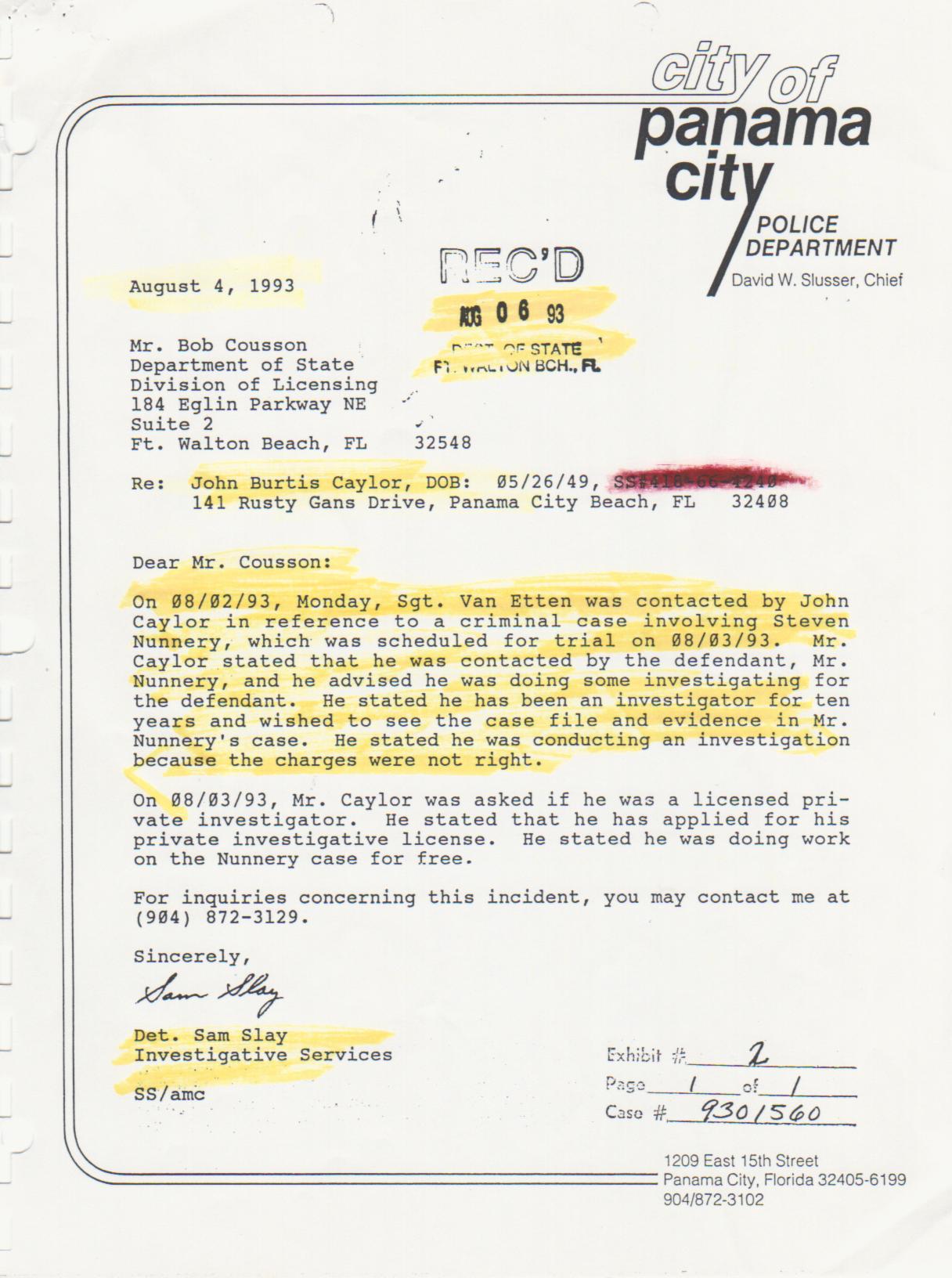