Arnone is a criminal who also owned Liberty Airlines based in Red Bank, New Jersey. Liberty Air was part of the Iran-Contra drug/gun smuggling network established by Col. Oliver North. View associate report linking Arnone's partners in NJ and elsewhere to casino operations in Korea and stock fraud in Canada.

Click Here for email report by Indy Singh former "Risk Architect for J.P. Morgan Trust" who is an associate editor at Insider-Magazine.com.

Meadows a former democrat prosecuted Joe Francis of "Girls Gone Wild" for his mentor Arnone who distributed the first "Push-shove" sex flick "Deep Throat" staring Linda Lovelace. Lovelace contended that she was made to perform oral sex by filmmakers who held a .45 cal. Pistol to her head throughout filming.
View Arnone's Conviction his crime associates - Click Here

State Attorney Steve Meadows a candidate for the same office in 2008, was deeded waterfront property from Arnone at Spanish Lake Estates another Arnone development located in Washington County, Florida. Meadows brother David has also been deeded property by Arnone and Meadows parents were deeded property next door to Arnone both at Spanish Lake Estates and Marina Bay Condominiums.

Members of the Outlaws Motorcycle gang also own property at the Washington County subdivision built by gangster Arnone and evidence obtained from confidential sources and official records indicates the land is used to clean drug profits and lanudry money from criminal enterprises.

Meadows brother David owns Holiday on Wheels on West 23rd Street in Panama City which was sold to him in 1995 and financed by Dixie Mafia figurehead "Charles Faircloth" who was deceased in 2008. Faircloth was also the financier for now defunct Aztec/Big Wheel a Panama City company debarred from federal contracts after discovery by Insider-Magazine.com they were smuggling illegal aliens and suspected terrorists onto top secret military bases. 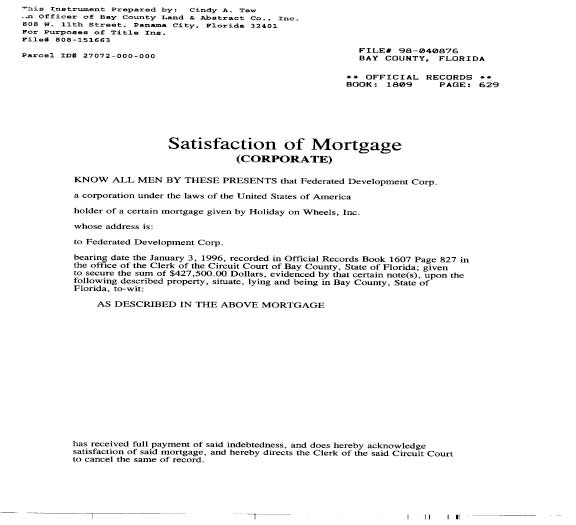 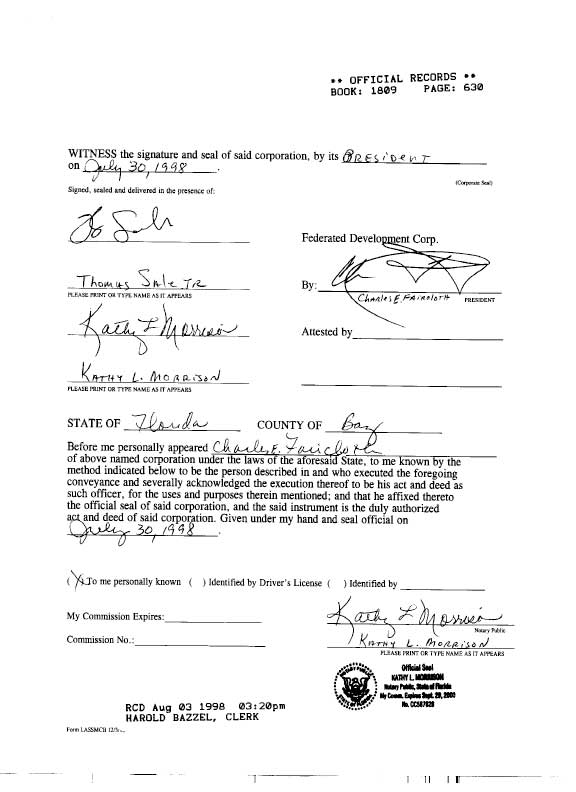 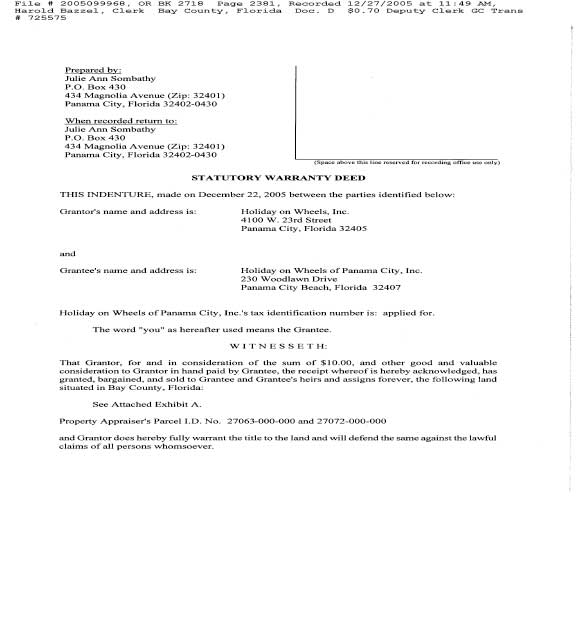 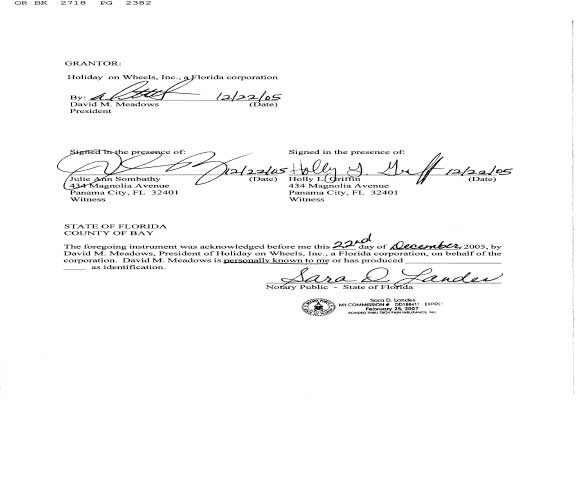 Both Insider-Magazine.com and PEER the Public employees for Environmental Responsibility requested an investigation into Aztez/Big Wheel by Meadows who refused because of his alliance with Faircloth and Dixie Mafia Kingpin Charles Hilton who has bankrolled Meadows current and last campaign for office. Meadows brother has a son who is serving time in prison for running a drug distribution ring. 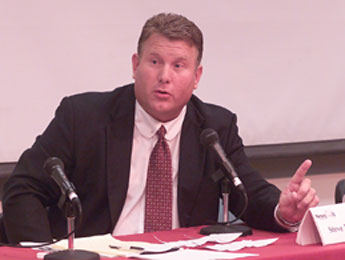 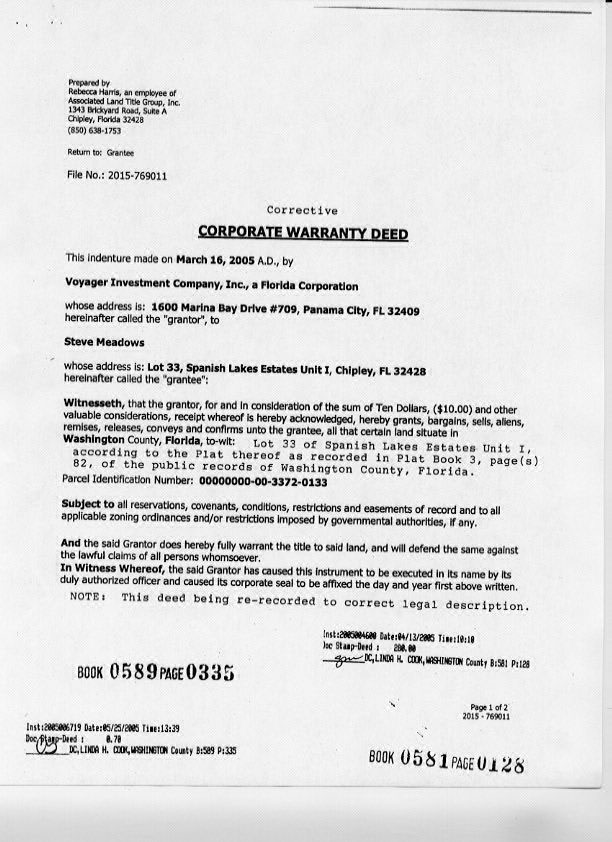 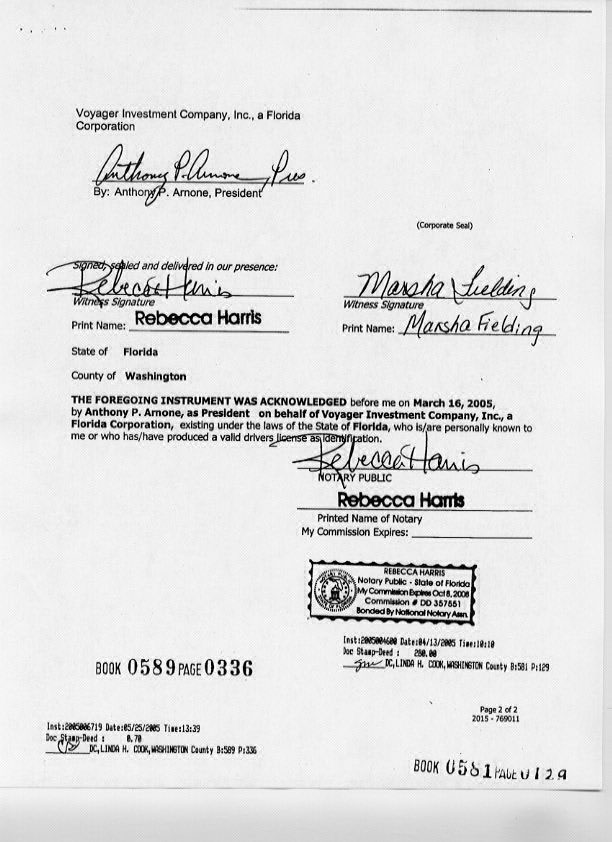 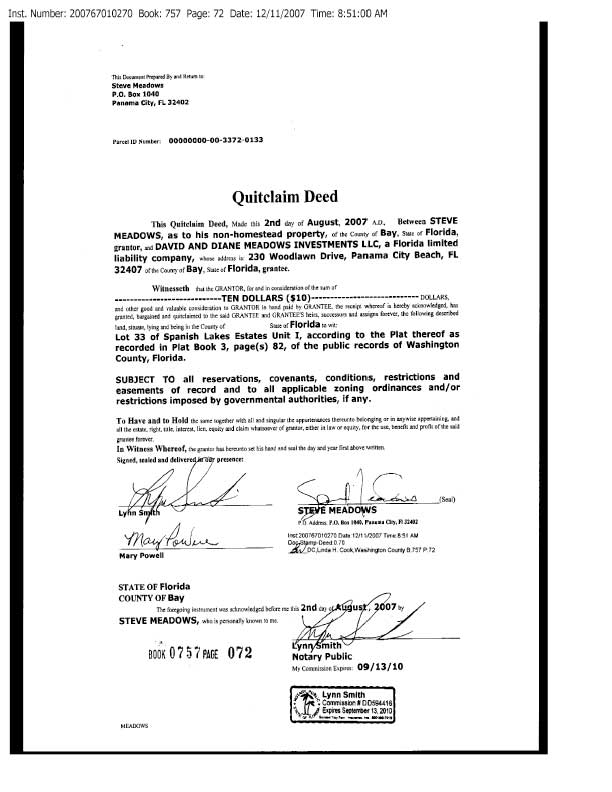 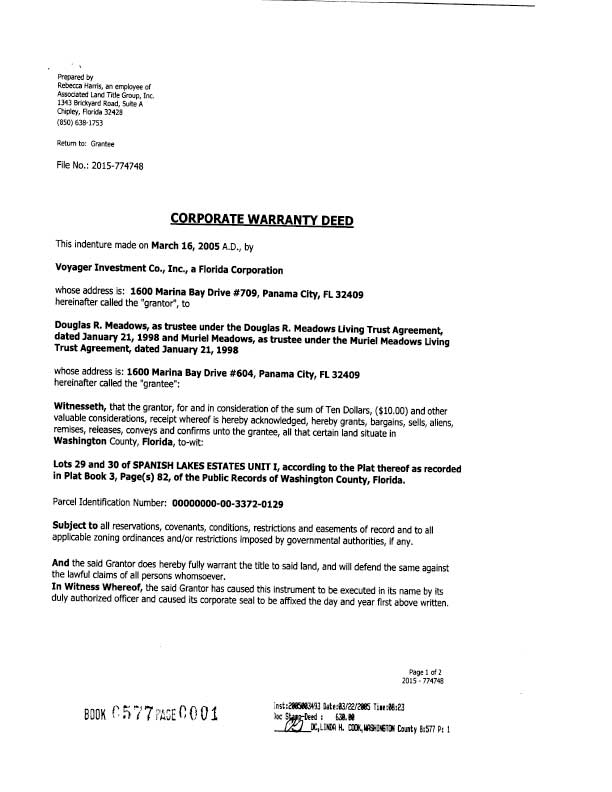 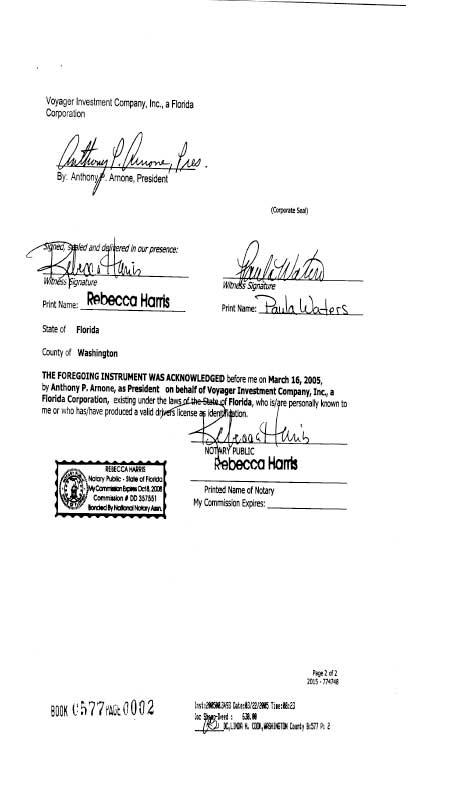 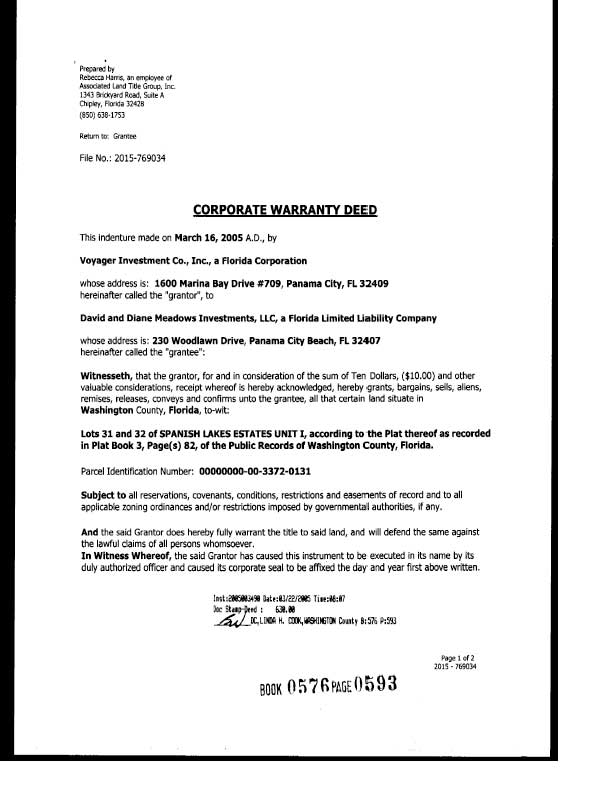 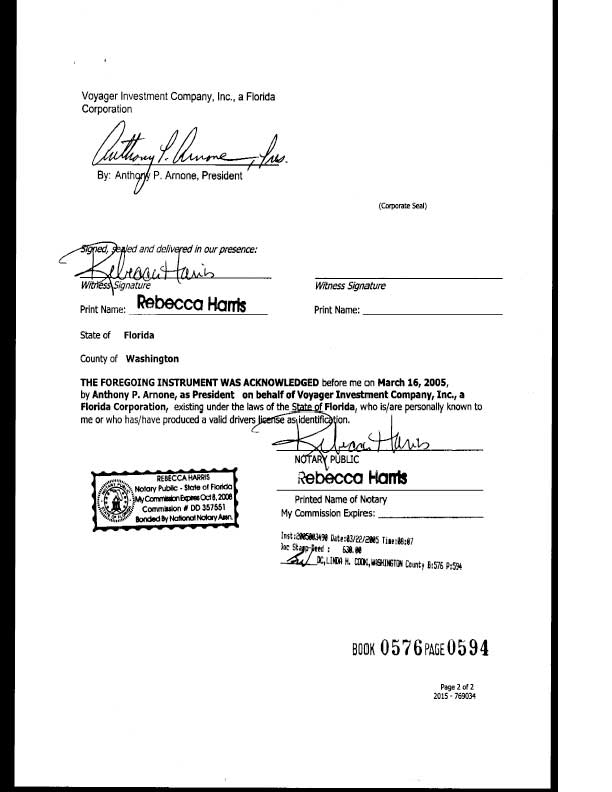 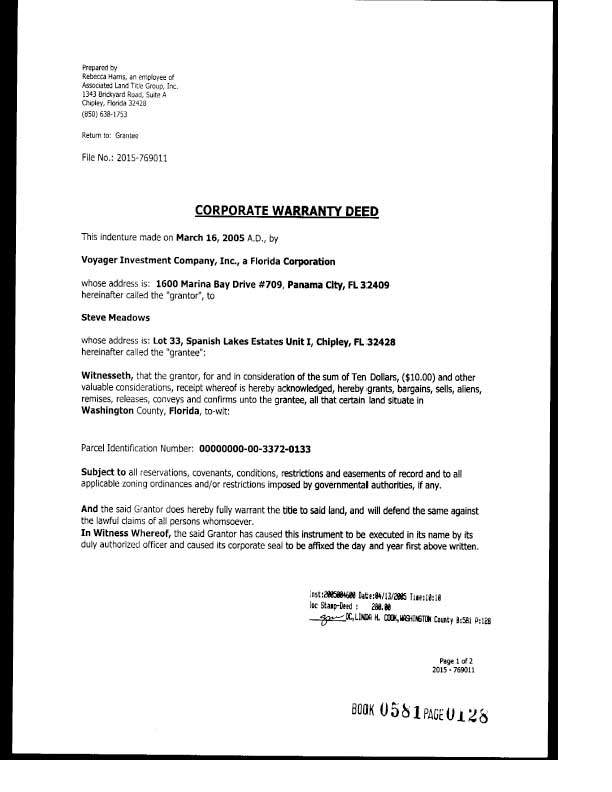 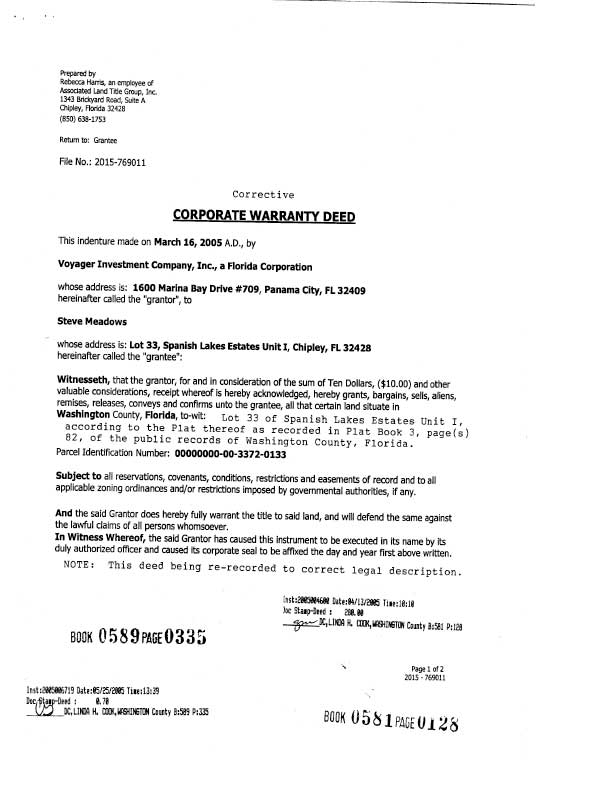 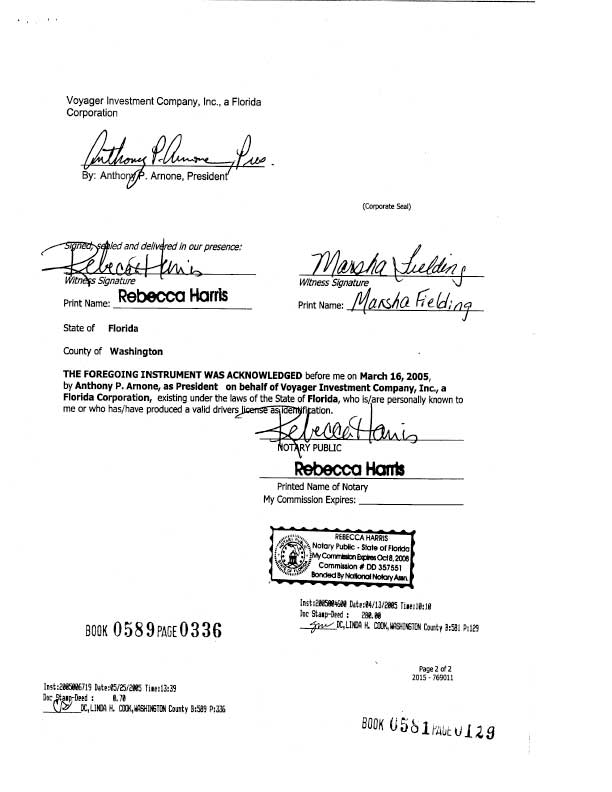 The Public Employees for Environmental Responsibility, PEER a Washington D.C. based environmental group, filed a written complaint and request with Meadows last year asking for a grand jury criminal investigation of Panama City's Aztec-Big Wheel and the Florida Department of Environmental Protections lack of enforcement in the NW Florida DEP offices supervised by Henry Hernandez and his superior Mary Jean Yon.

The allegations and complaint were officially turned over to State Attorney Meadows who gave judicial candidate "Joe Grammer" the case file. Grammer met with this editor and laughed at the facts he believed to be bogus and said he would refuse to make an inquiry as the grand jury had panned the information as bogus, even though federal law enforcement agencies brought criminal charges and the U.S. Air force debarred Aztec from future government contracts. See "U.S. Attorneys Story on front page of Insider-Magazine" 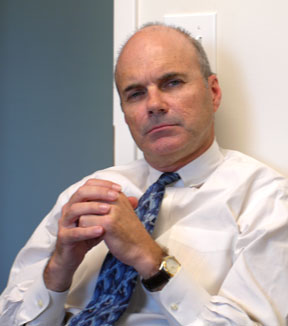 Former prosecutor and New County Judge Joe Grammer - claimed to presented Aztec/Big Wheel case to local Grand Jury. There was no investigation by State Attorney's office so how could grand jury have heard facts?

State Attorney Steve Meadows had plenty of reasons not to investigate the PEER and Insider-Magazine.com allegations. In the 2004 election year Democrat Meadows campaign was secretly run by Charles L. Hitlon and the Republican party, Insider-Magazine.com personally knows these facts to be true. In the 2008 campaign - the same Millner Group from New Jersey is running the show again and New Jersey native Greg Brudnicki is the Treasurer.

The majority of Meadows campaign Televison advertising, over $98,500 in 2004 and several hundred thousand in 2008 came from secret PACS with bogus addresses in Washington, D.C. and Virgina. The David Millner Group a New Jersey Public Relations firm was the conduit that secretly pumped Republican money into Meadows campaign, with Meadows complete knowledge.

The rat maze of campaign donations back and forth from the Club for Growth a D.C. based, "Who's Who", of the national Republican Party to Citizens For Safer Streets, Americans for Free Speech, Victims Rights, Americans For Jobs and other PACS is virturally impossible to trace.

One thing for sure, the Club for Growth boasts Dixie Mafia figures Charles L. Hitlon and Earl K. Durden as founding members. The unique maze of this financial campaign funding network is an outgrowth of the criminal operations by former U.S. Intelligence operatives under the continued leadership of George Bush, Sr. 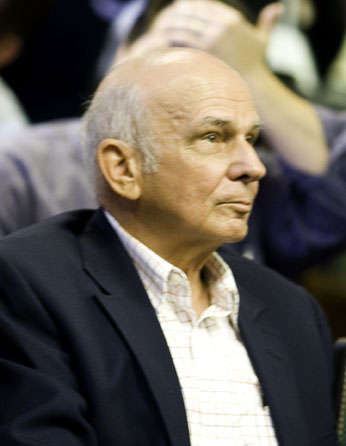 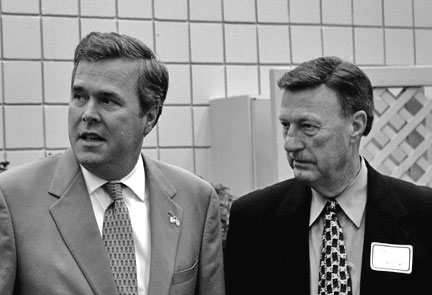 According to extensive evidence compiled by Insider-magazine.com, the network was set up during Bush's Iran Contra years specifically for the purpose of fighting clandestine wars and over-throwing democratically elected governments.

Below is partial documentation of the bogus PAC money to State Attorney Meadows campaign, Insider Magazine will present more evidence on Meadows campaign in follow-up stories. 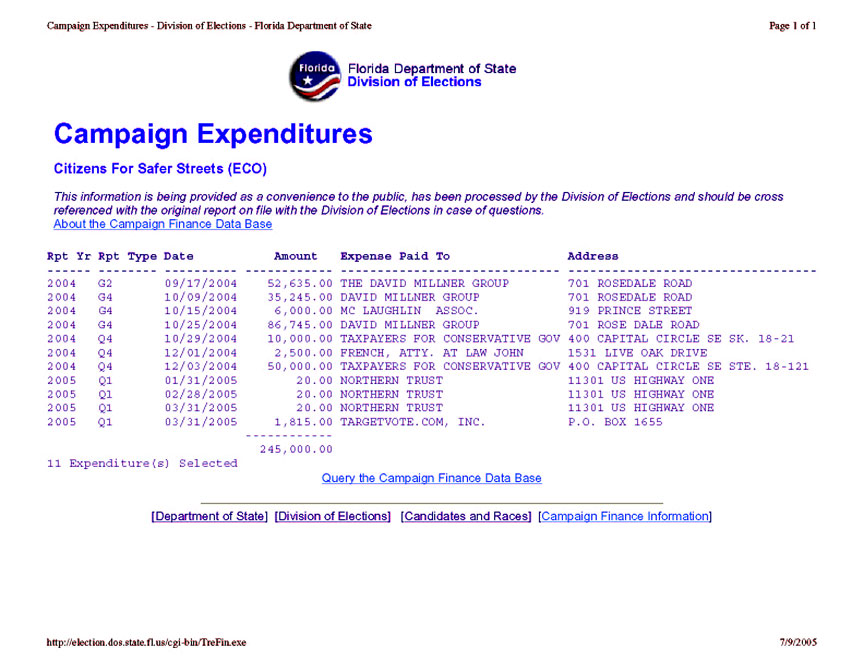 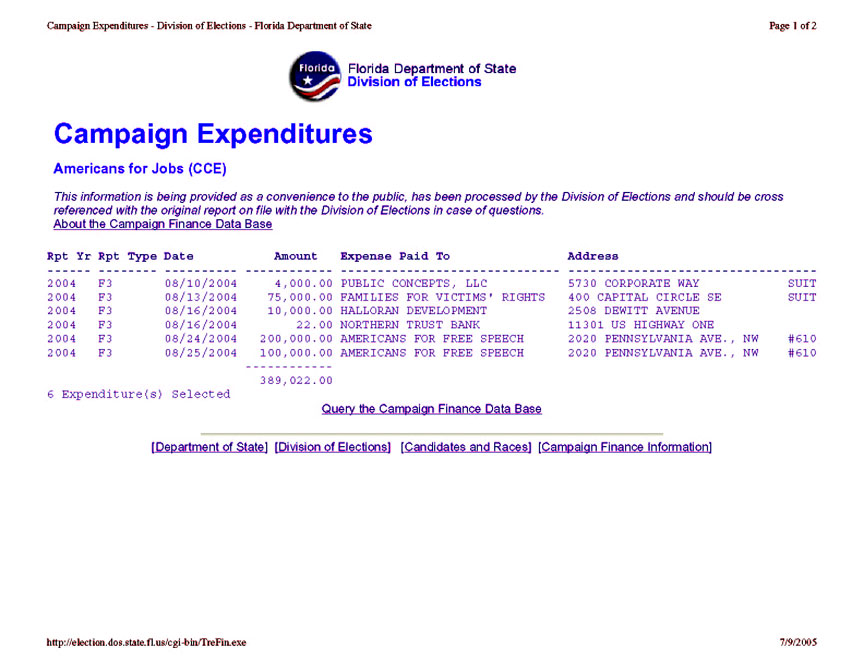 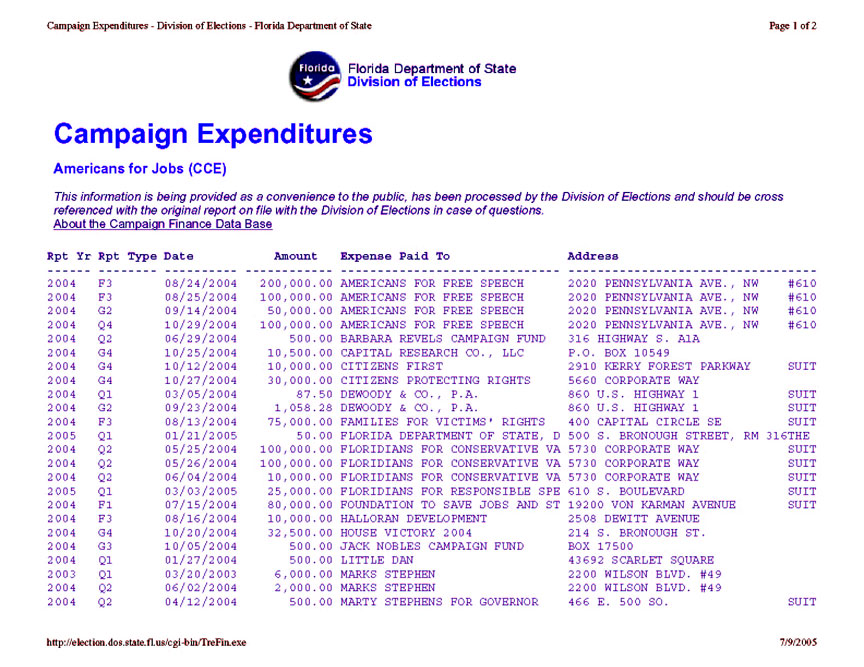 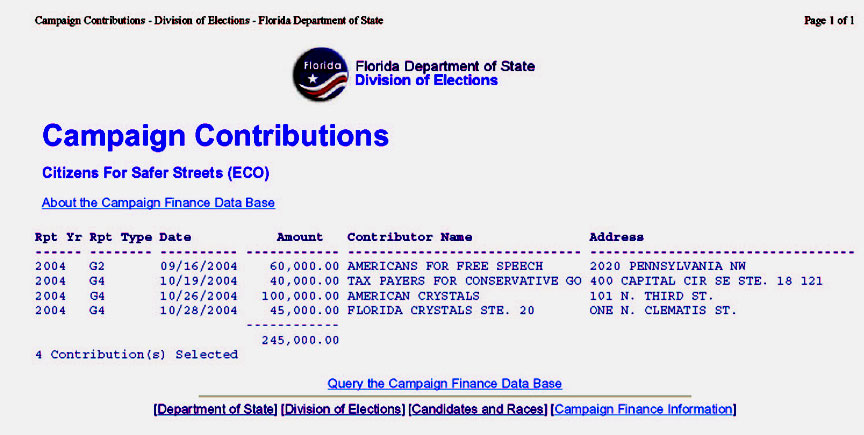 Another top Florida law enforcement figure deeply embedded in the network is former Bay County Sheriff Guy Tunnel former Director of the Florida Department of Law Enforcement. Tunnel was hand picked by Durden to oversee future operations after he after he was introduced to Bush in the February 2002 time frame, when he was flown to meet the President at his ranch in Crawford, Texas. Around that time Bush appointed Tunnel as Director of Homeland Security for the state of Florida.

Convicted felon and Refuted International Drug kingpin, "James Finch", CEO of Phoenix Construction and Phoenix Racing personally flew Tunnel to the meeting with President George Bush, Jr. aboard his Lear Jet, according to Insider Magazine confidential sources. Finch's construction companies are awarded all bids for water and sewer systems throughout the Florida Panhandle.

Finch has long been the supposed target of federal law enforcement agencies for importation of narcotics into the United States and violation of the Mann Act by Interstate Transportation of Prostitutes to influence and corrupt politicians. In reality Finch is a protected and valued fund raiser of the continuing Iran-Contra network established by Oliver North and Bush Sr.

Finch is also a business partner to Eddie Ray Eanes and Chris Montgomery all reported according to insider sources to be members in the notorious and murderous "Outlaws Motorcycle Gang". The Outlaws have established a regional Florida Headquarters on U.S. Hwy 231 North in Panama City, Florida. The Outlaws are a criminal motortcycle gang and have apparently established a working rappor with the Bay County Sheriff's department and the State Attorneys Office.

According to documents obtained by Insider Magazine, DEP's Mary Jean Yon also assisted Finch and county officials in the cover up by continuously granting delays and alterations of the contract. Additionally, Yon allowed Bay county officials to continue operating and fund a $32 million expansion of a waster water sewage treatment plant built in navigable United States waters, a violation of federal statutes.

Prior to his death Currenton broke Florida grand jury secrecy laws and he revealed the grand jury assembled to inquire about contract irregularities of the Bay County sub-aqueous sewer pipeline was in his words, "a sham". Currenton explained to Insider magazine that he was concerned the improperly constructed and exposed pipeline built by Finch's Phoenix Construction would accidentally be ruptured, dumping millions of gallons of raw sewage into Saint Andrews Bay, a potentially devastating blow to the Florida Panhandle.

Federal authorities have never busted Finch who served time in Florida prison for burglary and attempted murder charges. But they helped him control his organization by setting up a bust against his "loose mouthed brother," Don L. Finch, for trafficking in approximately $6 million worth of street valued drugs.

The prosecution of Finch's brother never made it into headlines of Panhandle media and according to inside sources, Finch openly bragged proceeds from the deal were actually used as a retirement payoff to Bay County sheriffs deputies and federal law enforcement officers.

According to our source, Finch had his brother drive a truck to Mexico and pick the narcotics shipment up and transport it back to Bay County, Florida, where he was promptly busted.

The federal grand jury documents which were completely revised twice concluded, that Don L. Finch was delivered several million in street valued drugs belonging to law enforcement agencies and that Finch was to sell the drugs in Dothan, Alabama and return the proceeds to undercover law enforcement officers.

The government claimed Finch made off with the drugs and money which was never recovered. Don L. Finch, who was a common laborer earning $1,000 per month with his brothers Phoenix Construction Company was fined $800 under the antiterrorism act and sentenced to a short prison term after a plea deal with the U.S. Attorney.

The federal judge in the case, Stephen Mickle, a black man appointed by President Clinton was arrested and jailed for drunken driving in Lake City, Florida. Mickle subsequently lost his driving rights in the state of Florida for his refuseal to take a breathe analyzer test.

THESE PEOPLE FEAR PUBLIC EXPOSURE, THAT'S WHY THE LOCAL MEDIA IS IN THEIR POCKET...

James Finch, dubbed "Mr. Concrete", by Dixie Mafia figures for his violence, mailed this editor a warning letter after we exposed Finch's prison background and the drug deal to the public in February 2000.

Approximately 3 weeks later and several hang up calls and a barrage of e-mails from Finch and warnings from his Dixie Mafia associates, this Editors mother was attacked from behind and suffered a serious head injury resulting in multiple hematomas after she went alone to inspect one of her vacant rental properties in Enterprise, Alabama.

In the 2000 attack neither the FBI or local police would investigate the incident which doctors determined to be caused by a hammer instead of a backward fall. Although her neurologists did not expect her to fully recover from her injuries, she did so after months of intensive physical therapy. 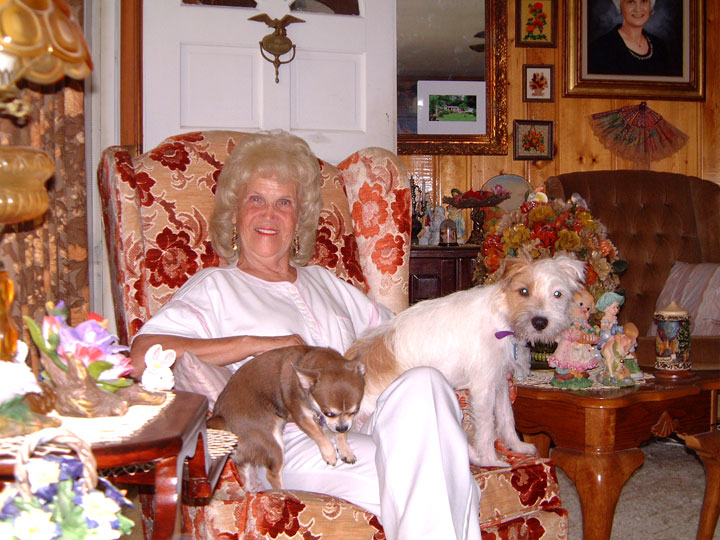 Insider-Magazine.com Publishers Mother Nellie Ruth Caylor and her other sons in happier days.

2006 Update My mother was killed by blunt force trauma at one of her apartment buildings at Enterprise, Alabama. She was attacked and beaten to death with a baseball bat. I have subpoenaed James Finch to a Bay County Court Hearing on May 14th at 1:30 PM at the Bay County Courthouse. This is in reference to the "disorderly conduct charge brought against me by State Attorney Steve Meadows and resulted from actions to stop me from making copies of court records in another death case cover-up at the Bay County Courthouse several weeks prior to my mothers still unsolved murder. According to Florida Secretary to State records "Finch and William V. Kinsaul" are business partners. Kinsaul's son is the Chief Deputy Clerk of the Bay County Court and is running as the Republican for that position.

My Mother on the slab after her August 2006 Murder THIS PHOTO HAS BEEN REMOVED. 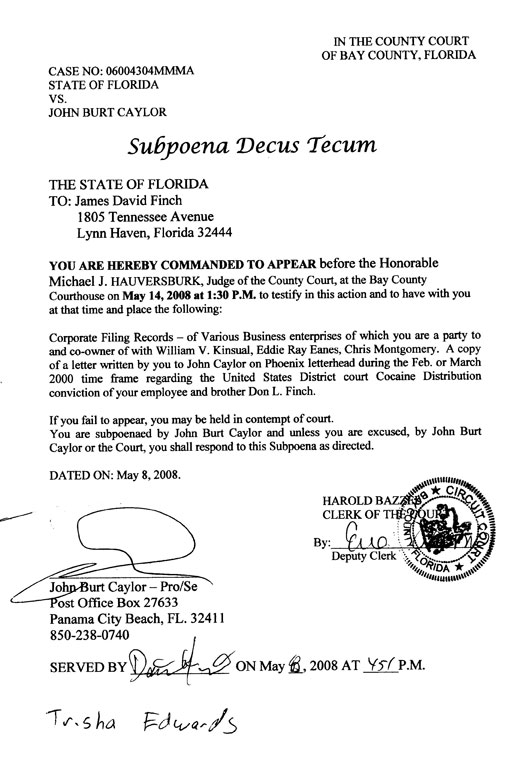 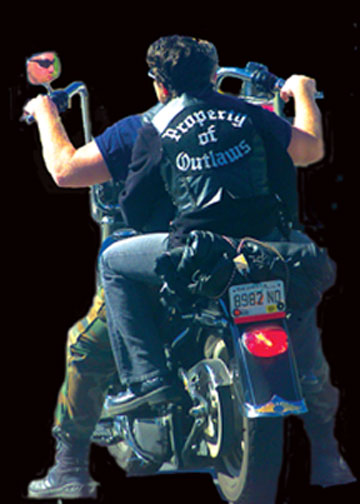